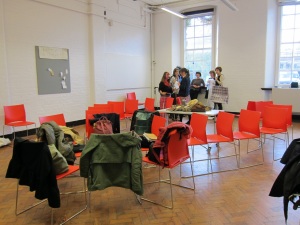 This week we started with a session run by Saioa Olmo.

The Line:  Limits, Boundaries and Identities.

“The Line” is a game that assigns different roles to different individuals within the group in order to explore concepts of limit, boundary and identity.  By setting up an imagined ‘territory’ in which participants have to improvise these roles it encourages us to look at group dynamics and the impact of limits and boundaries on constructed identities.  In particular it looks at:

Intro and Warm up

The game began with a warm up where we explored the space in which we were working: little by little however, through Saioa’s narration we were led to believe this space had become undefined space, without walls, a never-ending room with no limits in which we kept moving. We were encouraged to visualise this space. To decide how it made us feel.  To consider how we moved in it. We met other bodies in this space and were encouraged to think how they related to us.  Slowly we moved towards one of them and exchanged some words.  We said goodbye to this person with a gesture, knowing we would meet again, soon. And went on our way.

We were introduced to the objects.  One of these things was ‘ours’.   It was up to each of us to select ‘our’ object. Attached to each object there were clear guidelines for the roles each of us would play in the improvisation. We didn’t share these at this point so each of us was responding to our own guidelines while also reacting to the others.  The ‘play’ began.

Each role had a title, a mission and some tasks that needed completing.  The tasks were distributed between the roles and included: looking after the limits and performing authority in doing so, transmitting information, giving importance to affections, using narratives as tools of power, identifying peers, guiding people…

Participants, were not aware about the roles played by the others and, although some of their performance was marked, most of it was left to improvisation.

At the end (which did happen) we shared our thoughts on: 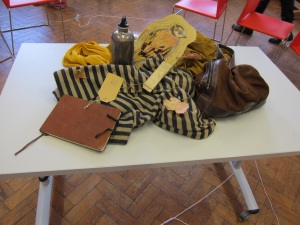 The most exciting phrase to hear in science, the one that heralds the most discoveries, is not ‘Eureka!’ (I found it!) but ‘That’s funny…’ Isaac Asimov

So, we decided to consider – do the arts and arts practice have anything particular to offer or should we be valuing creativity in every activity and every kind of learning?

We played a game.  Throwing a ball to each other catching it and creating our own similes.  This ball is like the earth, like the internet, like a quark because…………

When it came to the quark we recognised creative thinking relies as much on domain knowledge as anything else.

We discussed what was going on in the process of this game. Looked at importance of analogy and metaphor. Re-visited notions of domain knowledge, tacit knowledge, art form expertise within developing creativity. Wondered whether creativity is possible without knowledge? Asked what the connection might be between  creativity and seeking new solutions in scientific contexts. We looked at Simonton: [1] whose credits include – Distinguished Professor. Expertise: Genius, creativity, leadership, and aesthetics – the cognitive, personal, developmental, social, and cultural factors behind eminence, giftedness, and talent in science, philosophy, literature, music, art, cinema, politics, and war! Who suggests scientific discovery happens in one of three ways:

Simonton thinks most new discoveries are a combination of all these. Interestingly he also notes creative scientists are more likely to have wider interests and hobbies such as art, music, crafts, drawing, painting, photography, poetry. (c.f. Wellcome Trust interviews with scientists)  What implications might this have for artists? He also suggests good scientists also usually read widely, developing what he calls associative richness of thinking. e.g.:

Darwin: In October 1838, that is, fifteen months after I had begun my systematic enquiry (on evolution) I happened to read for amusement Malthus on Population…. Malthus economist “Essay on the principle of Population” 1798. Central theme of Malthus’ work was that population growth would always be greater than growth of food supply, creating perpetual states of hunger, disease, and struggle.

We considered how this encounter with Malthus might have affected Darwin’s own thinking.  Tried to think what conclusions we might also reach about this statement. Wondered about possible solutions that might help us face this situation? Deconstructed our thinking process.  We also noted, with interest that Simonton also speaks about the amounts of money given to science to be creative, (to pursue scientific enquiry) and compares that with the funding for the arts (in US) We compared NESTA in UK, an initiative that originally had arts projects as part of it but decided to stop funding them – thinking it was better to go down the “innovation” route.

We looked at Polayni and the concept of tacit knowledge[2]

We examined the way Polayni had explored the role of what he originally called personal knowledge and then tacit knowledge and the way it works together with passion/commitment in scientific discovery. Looked at his notion that creativity in science is almost always a combination of the two. Tacit knowledge, he suggests, is that knowledge that we possess but may not find easy to pass on to others in traditional sense by writing down. Best learned by experience.

He acknowledges the role played by inherited practices (tradition) within this. The fact that we know more than we can clearly articulate helps to explain how knowledge is passed on by non-explicit means, for example via apprenticeship i.e. observing a master, and then practising under the master’s guidance. C.f. Brecht’s idea of the masterful copy.  Not a copy as such but a way of starting with what has gone before, acknowledging it, drawing on it and then making your own work.  Supporting the concept that creativity rarely comes from nowhere but builds up on what already exists.

Looked at his work on tacit knowledge: exploring its role the in bringing about creativity and innovation in the workplace. Considered his thinking that knowledge is: “a resource created by humans acting in relationship with one another”  within which the artisan, with her/his practical knowledge, can play an important role.

e.g. Imagine we were to design a new table for a learning classroom such as this. Nonaka might explain the process as taking place in these four stages:

We thought about the implications such a process might have in considering the stages of creative learning.  Wondered how we might best share our own tacit knowledge but also how we might best draw on the tacit knowledge of our participants.  Considered how this process might be reflected in a classroom activity.  Examined the implications for devising creative learning experiences.  Looked at our own art forms.  Asked what tacit knowledge we possessed.  Tried to recall how we had acquired it. (Drama, dance, visual arts, music?)

We ended with a glance at the QCA, (Qualifications and curriculum development agency) Personal, Learning and Thinking Framework (2007) Creativity: Find it, Promote It (2003)

We wondered how much time each of these might be given in the current school curriculum.

[3] Managing Flow: A Process Theory of the Knowledge-Based Firm (Palgrave, 2008)